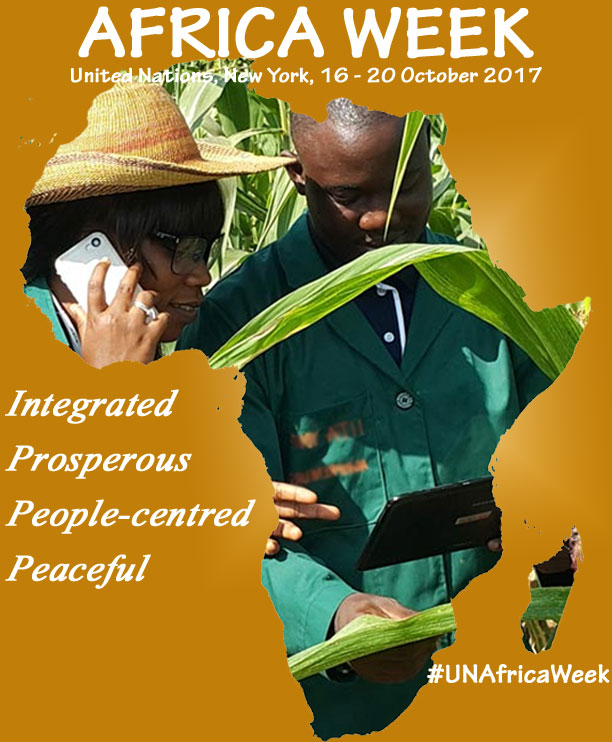 FAU’S AGENDA IS TO CREATE A AU USA UN CIVIL SOCIETY PUBLIC-PRIVATE PARTNERSHIP
2016 DOCUMENT IN REVISION AND UPDATE FOR 2017
NOW during the United Nations Africa week 2017 sponsored by the Office of the Special Adviser on Africa (OSAA) who supports the work of civil society organizations, like Friends of the African Union and New Future Foundation,  through the publication of a number of reports highlighting their contributions to addressing issues on peace, security and development in Africa and maintains a NGO database of African civil society organizations aimed at promoting their accessibility to the UN;
FURTHERMORE, the Office of the Special Adviser on Africa partners with civil society organizations to organize thematic high-level events such as African Week 2017 whose theme for 2017 is: “Supporting an Integrated, Prosperous, People-centred, Peaceful Africa: Towards the Implementation of Agenda 2063 and the 2030 Agenda for Sustainable Development;
RECOGNIZING the role of civil society in Africa will continue to grow, as they are expected to be significantly involved in monitoring progress in achieving the United Nations Sustainable Development Goals agenda at global level, as well as African Union’s Agenda 2063 and its first Ten-year Implementation Plan running from 2014 to 2023 at continental, regional and national levels, among others;

RECALLING the objectives and principles enshrined in the Constitutive Act of the African Union and FAU’s participation in the 2013 review at the African Union’s Mission HQ to the United Nations;

ADDITIONALLY RECALLING the Protocol on Amendments to the Constitutive Act of the African Union adopted by the First Extra-Ordinary Session of the Assembly of Heads of State and Government in Addis Ababa, Ethiopia in January 2003, and in particular Article 3(q) which invites the African Diaspora to participate as an important component in the building of the African Union;

RECOGNIZING the need to build sustainable partnerships between the African continent and the African Diaspora through sustainable dialogue and effective collaboration with governments and peoples of different regions of the World in which the Diaspora populations are located;

COGNIZANT of the fact that culture and identity inform all facets of development;

ACKNOWLEDGING the need to celebrate and preserve the shared heritage between Africa and peoples of African descent in the Diaspora;

BEARING IN MIND that the African Diaspora represents a historical and evolving experience which calls for an approach that is sensitive to the specificities of the different regions;

AFFIRMING the need to promote South-South Cooperation as a framework for enhancing mutual development as well as Pan-African Solidarity;

REAFFIRMING the importance of women and youth as important pillars of our society that should be mainstreamed in all Diaspora discourses and actions;

ACKNOWLEDGE of the importance to the African Diaspora of the establishment of The Economic, Social and Cultural Council (ECOSOCC) under the provision of Articles 5 and 22 of the Constitutive Act;

ACKNOWLEDGING ECOSOCC Statutes, adopted by the AU Assembly in July 2004, define it as an advisory organ composed of different social and professional groups of AU Member States (Assembly/AU/Dec.48 (III)). The first ECOSOCC General Assembly was formally launched on 9 September 2008 in Dar es Salaam, UR of Tanzania.

KNOWLEDGABLE of the Structure of ECOSOCC and that under article 4 of the ECOSOCC Statutes, the Council is composed of 150 CSOs: 1 two CSOs from each Member State; 10 CSOs operating at regional level and eight at continental level; 20 CSOs from the African Diaspora, as defined by the Executive Council and covering the continents of the world; and six CSOs, in ex-officio capacity, nominated by the AU Commission and based on special considerations, in consultation with Member States.

UNDERSTANDING that Article 4 also provides for Member State, regional, continental and Diaspora representatives to be elected on the basis of 50 percent gender equality and 50 percent aged between 18 and 35. Members are elected for four-year terms and may be re-elected once.

CONVINCED that popular participation in the activities of the African Union, as enunciated in the African Charter for Popular Participation, is a prerequisite for its success;

GUIDED by the common vision of a united and strong Africa and by the need to build a partnership between governments and all segments of civil society, in particular women, youth, the private sector and the African Diaspora, in order to strengthen solidarity and cohesion among our peoples;

CONVINCED of the need to build on these efforts and outcomes as the basis for establishing a solid foundation for the rejuvenation of the global African family as an instrument of wider renaissance;

REALIZING the imperative of a sustained and coordinated approach and ownership of the African Diaspora related programmes and projects so as to promote their effective implementation and impact;

COMMIT to cooperate in the political, economic and social areas outlined in this Report of the Global African Stakeholders Convention and Programme of Action, and implementation and follow-up modalities.

EXPRESSING our appreciation to Head of Secretariat Dr. Jinmi Adisa for his support in holding the Global African Diaspora Stakeholders Convention.

1. We have implemented phase I of the task to create the African Diaspora Volunteer Corps at fauedcorp.org with the African Civil Society Organizations (CSO). CSO members include but are not limited to:

• Social groups such as those representing women, children, youth, the elderly and people with disabilities and special needs

• Social and professional organisations in the African Diaspora (in accordance with the definition approved by the Executive Council of ECOSOCC).

3. We have created this day the framework for a report to be issued by May 25th 2016 on the African Institute of Remittance based on previous actions of the African Diaspora and organs and officials of the African Union since July 16 2012.

4. We have created this day the framework for a African Investment Fund based on previous actions since July 16 2012 and the business model of the Community Reinvestment Fund which shall serve as a guide in the creation of a global organized with a ownership structure that supports the people of the African Union.

5. We Africans of the Diaspora acknowledge that under Article 11 of the ECOSOCC Statutes there is established 10 Sectoral Cluster Committees as key operational mechanisms to formulate opinions and provide input into AU policies and programmes. The Committees are: Peace and Security; Political Affairs; Infrastructure and Energy; Social Affairs and Health; Human Resources, Science and Technology; Trade and Industry; Rural Economy and Agriculture; Economic Affairs; Women and Gender; and Cross-Cutting Programmes (such as HIV/AIDS, international cooperation and coordination with other AU institutions and organs). The ECOSOCC General Assembly may recommend amendments to the established Sectoral Cluster Committees. We will endeavor have implemented preliminary work on the task to create the Development of a marketplace for African development in line with ECOSOCC Statues and shall report back to assembly not later than May 25th 2016 on the basis of the aforementioned 10 Sectoral Cluster Committees..

We do this work so as to encourage the Diaspora to organize our self in a global network and to establish appropriate mechanisms that will enable our increasing participation in the affairs of the African Union as observers and eventually, in the future, as a sixth region of the continent that would contribute substantially to the implementation of policies and programmes.

Acknowledge the responsibility of the African Diaspora to fund and host rotational AU Diaspora Conference in Africa and in the Diaspora to review the implementation of this Programme of Action to hold the 9th Pan African Congress planning sessions shall have the following Committees:

So we sign as CSO’s and or their representatives