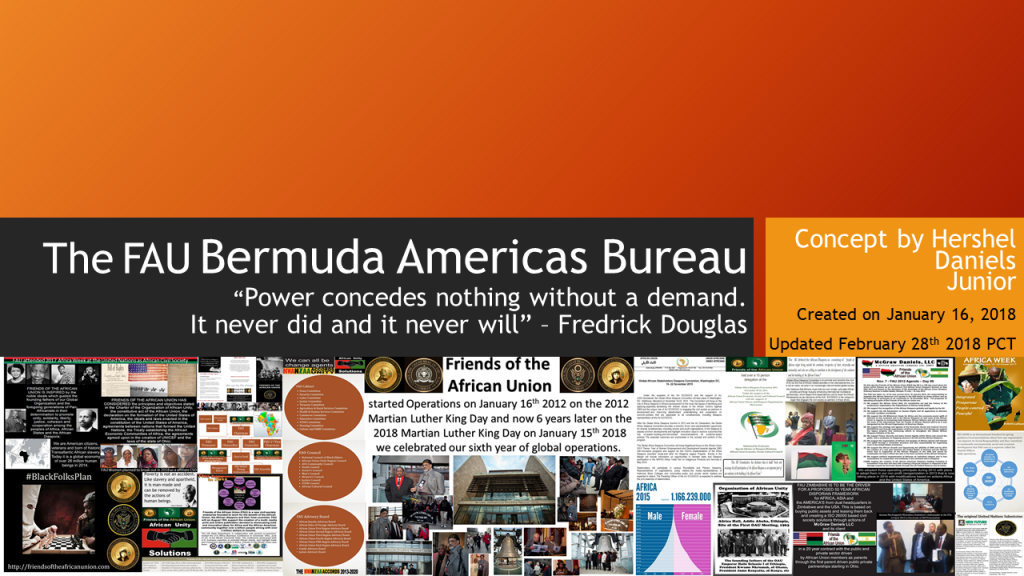 Aware of the rich and diverse human and institutional resources at the grassroots level, the new African Union is devoted to building strong partnerships between the governments and all segments of the society.

The Friends of the African Union has taken organization of this civil society in the USA.

On May 25th 2012 further action was taken on creating a global African Union Diaspora Civil Society Alliance with delegates from around the world having voting privileges in the AU’s ECOSOCC . The Diaspora as a whole having 20 votes and the blacks in the United States having 4 votes. Friends of the African union will organize that vote.

We will target October 15th 2018 as the day this vote is organized in America.

The African Union (AU) is a union of 54 African states; the only all-African state not in the AU is Morocco. Established on 9 July 2002, the AU was formed as a successor to the Organization of African Unity (OAU). The most important decisions of the AU are made by the Assembly of the African Union, a semiannual meeting of the heads of state and government of its member states.

The African Union [AU] first ever African Union Diaspora Summit meet on Africa Day 2012 May 25th in Durban South Africa with delegates drawn from around the world who acknowledged their roots in Africa based on AU orders as far back as 2008..

The African Union Diaspora Summit was the first of its kind just a year before the 50th year [May 25th 2013] celebration of the birth of the AU. It was organized by the AU world-wide with the view to harnessing African Diaspora contributions to support bilateral and multilateral trade between a worldwide association of 1.4 billion people with over 4 trillion dollars in annual revenue.

In their deliberations in the African Union Diaspora Summit Ceremony were guided by the objectives that have been in place since 2002, namely:

3.a To create sustainable partnerships between the African Diaspora and the African continent through a realizable programme of action

3.b To create sustainable dialogue, partnerships and strengthening of Pan African solidarity for a better Africa and its Diaspora, and;

3.c To promote South-South cooperation for the betterment of the African continent and its Diaspora