In 2005, the AU defined the African Diaspora as “… peoples of African descent and heritage living outside the continent, irrespective of their citizenship, and who remain committed to contribute to the development of the continent and the building of the African Union.”

We, Friends of the African Union, as a organization in formation, attended the December 16th2011 meeting in Washington at the invitation of Prof. David L. Horne where Her Excellency Ambassador Amina Salum Ali the African Union’s Permanent Representative powerful remarks called on all people of African Descent in the USA to organize around the African Union roadmap for the Diaspora.

Establishment of Friends of the African Union Jan 16th 2012 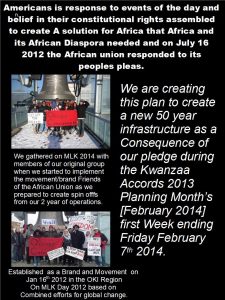 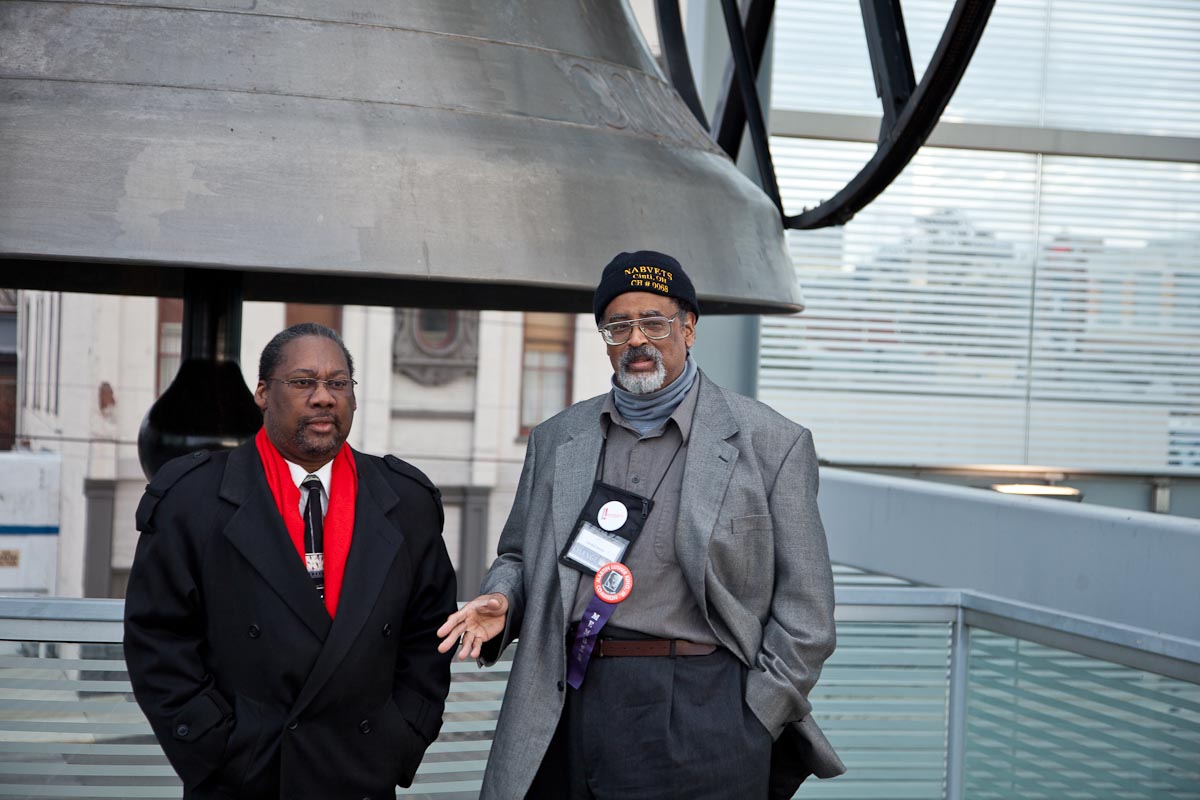 THE START OF FRIENDS OF THE AFRICAN UNION WITH OTHER ORGANIZATIONS AS PART OF THE KWANZAA AFRICAN DIASPORA UNITY SUMMIT, JAN. 28, 2012, HOWARD UNIVERSITY 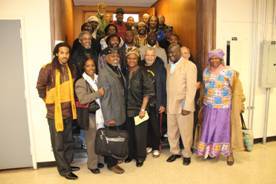 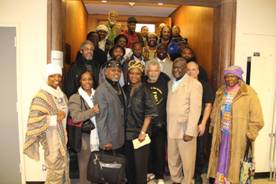 ORGANIZATIONS NOT ATTENDING (But which sent letters of support and giving their proxy vote to the four major issues at the unity gathering):

STIPULATED AGREEMENT FOR ALL ORGANIZATIONS TO ATTEND THE GATHERING:

To attend and vote, all organizations had to be

(a) Committed to building the African Union and to contributing to the unification and development of Africa,

(b) Committed to assist and participate with the African Diaspora in joining the AU as voting members, and;

(c) Committed to recognize Africa as their motherland and to use their networks to spread the word of the AU-Diaspora process and implementation.

BACKGROUND FOR THE UNITY GATHERING:

The African Union invited the African Diaspora to join it in determining the future of the African continent. That future will include becoming the Union of African States or the United States of Africa—that is, the current 55 African countries being organized as one nation of 55 federated states. That invitation was given in 2003, almost 8 years ago. To date, no single organization, or organizations in combination, has been able to accept that definition. Part of the reason for that, in fact a very big part of why that invitation is still unheeded, is the habitual tradition of Black organizations not sticking together and not collectivizing. With approximately 15,000 African oriented organizations and groups within the broad range of the African Diaspora—approximately 300 million people scattered over 90 different countries—the AU has been reluctant to bring any of them in, since those left out would surely complain vociferously.

There were many, many meetings, and just as many resolutions and promises to get something done. They all came to naught, and the invitation just hung there, waiting.

Then, in December, 2011, Ambassador Amina S. Ali, the principal AU representative in the USA, called together a Unity Symposium in Washington, D.C. The discussions there got very serious, but no real decisions were made. Thus, elements of the USA African Diaspora contingent decided to follow-through with that gathering by calling forth a definitive group of diverse organizations to form and establish a North American African Diaspora Unity Council to directly address the AU on behalf of the African descendants in this region, and to provide a roadmap for others on Central America, South America, parts of the Caribbean, Europe, and other parts of the Diaspora to follow suit.

THE AGENDA AND THE DECISIONS:

The meeting was run by African Consensus, thus anyone who had anything relevant to say about a topic in discussion was permitted to say it until the discussion had run its course, including addressing  all concerns and opposition.  The Agenda was straightforward and announced in the letter to the public.

There were five major items to discuss, debate and vote on:

(1) The creation and formation of a North American Region African Diaspora Unity Council,

(2) Official acceptance of the African Union’s definition of the African Diaspora (with an understanding that Pan Africanists in this region must be able to explain the nuances of that definition),

(3) Acceptance of Common Denominator Pan African principles and practices as a basis of unity without uniformity in this region,

(4) Acceptance of the Town Hall method of electing Community Councils of Elders and community AU representatives as an acceptable path to follow to comply with the ECOSOCC Statues and other AU requirements, and

(5) Discussion of the issue of African Diaspora legitimacy viz-a-viz the African Union. Each item was presented to the attendees by a different organizational member of the African Diaspora, and most of the session was videotaped for future reference.

(3)    Organizations that sent in letters of support for forming the NAADUC and proxy votes, were automatically included in the original organization membership.

(4)    Organizations that later decide to join the NAADUC will sign and submit letters agreeing to the three stipulations above (i.e., agreement to work towards African unification, etc.), and their applications will be voted on by the original members of NAADUC. A simple majority vote will approve a new application.

(5)    The NAADUC expects to represent a part of the African Diaspora at the Diaspora Summit in South Africa, May, 2012.

(2)    For purposes of recruitment, clarification and education in North America, and other regions, the NAADUC agrees that its members and others it contacts in the African Diaspora will recognize Africa as the motherland, and the NAADUC will educate all members of the region’s African Diaspora to understand that the current AU operational definition includes both the historical Diaspora and the modern Diaspora.

(3)    The NAADUC will send official letters to the AU addressing  #A above.

C.   Regarding the issue of acceptance of Pan African common denominator principles and practice in all engagements with the AU and with other Pan African organizations, it was discussed and   approved in the following ways:

1. Principle of Mutual Respect: That mutual respect for colleagues and fellow warriors and reverence and respect for African traditions and heritage will guide our deliberations and work; (APPROVED AS IS)

2. Principle of Inclusiveness: That the talent, skills, intelligence and creativity needed to increase African capacity and achieve Pan African unification is not and will not be determined by one’s political affiliation/ideology, gender, religion, language, class, or any other prejudice. (APPROVED AS AMENDED)

3. Principle of Unity Without Uniformity: That African descendants can be unified without uniformity and that forming Pan African partnerships for economic and political networking is necessary for moving forward ; (APPROVED BUT NEEDS RE-WORDING FOR CLARITY)

4. Principle of Consistency: That Diasporans should work consistently and relentlessly to join and fully participate in the African Union as voting members, bringing all available resources, experience, diplomacy and skills to that effort; (APPROVED AS IS)

5. Principle of African Democracy: That as members of the African Diaspora, we must work to develop inclusive democratic institutions for implementing the principles and goals of achieving the United States of Africa/Union of African States. (APPROVED WITH FOOTNOTE EXPLAINING AFRICAN DEMOCRACY AS OPPOSED TO MERELY REPRODUCING WESTERN DEMOCRACY OUT OF CONTEXT)

6.  Principle of Equivalent Capacity Building: That the African Diaspora Sixth Region must be developed to a level equivalent to a viable African Regional Economic Community. (APPROVED BUT WITH RE-WORDING FOR MORE CLARITY)

7.  Principle of Accountability (Newly Added): Pan Africanists should be willing to be held accountable for obligations and responsibilities they accept, whether financial, political or otherwise. Pan African leadership is more than a title or leaping out front; it requires integrity, transparency, mutual respect, and being accountable to one’s constituency. (APPROVED IN CONCEPT—BODY MUST LOOK AT HOW IT WAS HANDLED.)

D. Regarding the implementation of the Town Hall community-based process for electing AU-African Diaspora representatives accountable to the community that elects them, after serious discussion and clarification,there was unanimous approval by African Consensus.

In the discussion, it was explained that the method was in compliance with the Statues of ECOSOCC mandates and that the Town Hall/Community Council of Elders model had been developed, utilized, and validated in North America and elsewhere within the last five years to elect African Diaspora delegates/representatives for the African Union. This method advocates the election of 4 members for ECOSOCC from the USA and 1 member from Canada.

This body also recommended, using the same or a very similar democratic method, that 3 representatives are elected from Central America, 3 from the Caribbean, 4 from South America/Brazil, 4 from Europe and 1 from the Middle East/Asia, totaling 20 in all. That total of 20 is currently designated by the AU.  The NAADUC would spearhead getting these Town Halls done through its extensive networks, and it was recommended that Town Hall Talking Points, Recruitment Tips, etc., be sent to all NAADUC member organizations.

E. Regarding the issue of the legitimacy of the African Diaspora, building the 6th region into a Regional Economic Community trumps that whole discussion. Meanwhile, the NAADUC would address the historical, economic and cultural arguments for this legitimacy in Position Statements, Policy Statements, and a well-documented Vision Statement paper. The NAADUC will also produce a Self-Definition paper for the public. Those were the only decisions made concerning this issue, which was seen as a continuing one.

THANK YOU TO JOHN TRIMBLE AND BRAD GRANT, AND TO HOWARD UNIVERSITY,

Sample Letters From Those Organizations in Support But Which Could Not Attend:

Unfortunately, I  and my organizations cannot attend this particular gathering. However, I am sending this letter forward to inform all of you participating that the Friends of Tanzania, and a second organization, the Zanzibar Film Festival, as African Diaspora enterprises, fully support and vote for the official establishment and formation of the North American African Diaspora Unity Council. The FOT and the ZFF vote for this formation and requests  permission to join as two of the signatory organizations. We will fully  participate in all functions of the NAADUC.

The acceptance of  the AU’s current  definition of the African Diaspora, and we vote to accept the caveats     suggested concerning the modern and historical Diaspora and others. We also vote to send our acceptance forthwith to the African Union.

The   acceptance of  both the Town Hall  method as described in the Report from the December 16th Ambassador’s Diaspora Symposium, and the Common Denominator Principles, with whatever editing transpires at the meeting.

The positive collectivization of the African Diaspora so we can move forward now.

Unfortunately, I  and my organization cannot attend this particular gathering. However, I am sending this letter forward to inform all of you participating that the Africa-USA Chamber of Commerce, and the Pan African Global Trade and Investment Association entity,  two African Diaspora business engines, fully support and vote for the official establishment and formation of the North American African     Diaspora Unity Council. The Af-USA Chamber and the PAGTIA vote for this formation and requests     permission to join as two of the signatory organizations. We will fully  participate in all functions of the NAADUC. Further, we vote for the acceptance of  the AU’s current  definition of the African Diaspora, and we vote to accept the caveats suggested concerning the modern and historical Diaspora and others. We  also vote to send our acceptance forthwith to the African Union.

We fully support  the   acceptance of  both the Town Hall  method as described in the Report from the December 16th Ambassador’s Diaspora Symposium, and the Common Denominator Principles, with whatever editing transpires at the meeting. Finally, we fully support  the  positive collectivization of the African Diaspora so we can move forward  now.