California is the most populous state in the United States and the third most extensive by area. Located on the western (Pacific Ocean) coast of the U.S., California is bordered by the other U.S. states of Oregon, Nevada, and Arizona and shares an international border with the Mexican state of Baja California. The state capital is Sacramento. Los Angeles is California’s most populous city, and the country’s second largest after New York City. The state also has the nation’s most populous county, Los Angeles County, and its largest county by area, San Bernardino County.

If it were a country, California would be the 6th largest economy in the world and the 35th most populous. It is also regarded as a global trendsetter in both popular culture and politics, and is the birthplace of the film industry, the hippie counterculture, the Internet, and the personal computer, among others. Fifty-eight percent of the state’s economy is centered on finance, government, real estate services, technology, and professional, scientific and technical business services. The San Francisco Bay Area has the nation’s highest median household income by metropolitan area, and is the headquarters of three of the world’s largest 20 firms by revenue, Chevron, Apple, and McKesson. Although it accounts for only 1.5 percent of the state’s economy, California’s agriculture industry has the highest output of any U.S. state.

When Los Angeles was first established in 1781, 26 of the 46 original settlers were black or mulatto, meaning a mixture of African and Spanish origins.

Beginning in 1793, Juan Francisco Reyes, a mulatto settler, served as elected mayor of Los Angeles. A member of the 1769 Portola expedition, Reyes would serve three terms as mayor.

Pío Pico, California’s last governor under Mexican Rule, was of mixed Spanish, African and Native American ancestry. Pico spent his last days in Los Angeles, dying in 1894 at the home of his daughter Joaquina Pico Moreno in Los Angeles. He was buried in the old Calvary Cemetery on North Broadway in Downtown Los Angeles, before his remains were relocated.

Blacks and mulattoes did not face legal discrimination until after California was handed over to the United States in 1848. Many white Southerners who came to California during the Gold Rush brought with them racist attitudes and ideals. In 1850, there were twelve black people registered as residents of Los Angeles. Because many blacks were enslaved until abolition in 1865, few blacks migrated to Los Angeles before then. Due to the construction of the Santa Fe Railroad and a settlement increase in 1880, increasing numbers of blacks came to Los Angeles. By 1900, 2,131 African-Americans, the second largest black population in California, lived in Los Angeles.[1]

In 1872, the First African Methodist Episcopal Church of Los Angeles (First A.M.E. or FAME) was established under the sponsorship of Biddy Mason, an African American nurse and a California real estate entrepreneur and philanthropist, and her son-in-law Charles Owens. The church now has a membership of more than 19,000 individuals.

The first branch of the NAACP in California was established in Los Angeles in 1913.

From approximately 1920 to 1955, Central Avenue was the heart of the African-American community in Los Angeles, with active rhythm and blues and jazz music scenes.

In 1928, World War I veteran William J. Powell founded the Bessie Coleman Aero Club. In 1931, Powell organized the first all-black air show in the United States for the Club in Los Angeles, an event that drew 15,000 visitors. Powell also established a school to train mechanics and pilots.

Singer-songwriter Ray Charles moved to Los Angeles in 1950. In 2004, his music studio on Washington Blvd. in Los Angeles was declared a historic landmark. 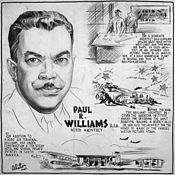 Poster from Office of War Information about Paul Williams, 1943.

The Theme Building, an iconic landmark structure at the Los Angeles International Airport, opened. The structure was designed by a team of architects and engineers headed by William Pereira and Charles Luckman, that also included Paul Williams and Welton Becket. Born in Los Angeles in 1894, Williams studied at the Los Angeles School of Art and Design and at the Los Angeles branch of the New York Beaux-Arts Institute of Design Atelier, subsequently working as a landscape architect. He went on to attend the University of Southern California, School of Engineering, designing several residential buildings while still a student there. Williams became a certified architect in 1921, and the first certified African-American architect west of the Mississippi.

In 1954, Dorothy Dandridge (who was originally from Ohio but settled in Los Angeles) became the first black actress to be nominated for an Academy Award for Best Actress for her performance in the 1954 film Carmen Jones. Many years passed before the entertainment industry acknowledged Dandridge’s legacy. Starting in the 1980s, stars such as Cicely Tyson, Jada Pinkett Smith, Halle Berry, Janet Jackson, Whitney Houston, Kimberly Elise, Loretta Devine, Tasha Smith, and Angela Bassett acknowledged Dandridge’s contributions to the role of black Americans in film.

In 1966, Mervyn Dymally, a Los Angeles teacher and politician, became the first African American to serve in the California State Senate. He went on to be elected as Lieutenant Governor in 1974.

In 1972, Wattstax , also known as the “Black-Woodstock,” takes place in the Los Angeles Memorial Coliseum. Over 100,000 Black residents of Los Angeles attended this concert for African American pride. Later, in 1973, a documentary was released about the concert. 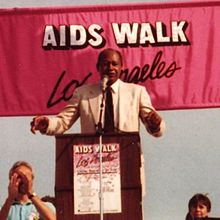 Tom Bradley speaking at AIDS Walk LA at the Paramount Studios lot in 1988.

In 1973, Tom Bradley was elected as Mayor of Los Angeles, a role he’d hold for 20 years. L.A.’s first African American mayor, Bradley served over five terms, prior to the establishment of successive term limits, making him the longest-serving mayor of Los Angeles.

In 1981, two years after being drafted into the Los Angeles Lakers, Magic Johnson signed a 25-year, $25-million contract with the Lakers, which was the highest-paying contract in sports history up to that point. Johnson’s career was closely followed by the media and he became a favorite among Los Angeles sports fans. Among his many achievements are three NBA MVP Awards, nine NBA Finals appearances, twelve All-Star games, ten All-NBA First and Second Team nominations and he is the NBA’s all-time leader in average assists per game, at 11.2. Since his retirement, Johnson has been an advocate for HIV/AIDS prevention and safe sex, as well as an entrepreneur, philanthropist, broadcaster and motivational speaker. Named by Ebony Magazine as one of America’s most influential black businessmen in 2009, Johnson has numerous business interests, and was a part-owner of the Lakers for several years. Johnson also is part of a group of investors that purchased the Los Angeles Dodgers in 2012 and the Los Angeles Sparks in 2014.

Carl Lewis came to prominence at the 1984 Summer Olympics in Los Angeles, winning four gold medals, matching Jesse Owens’ legendary feat of winning four gold medals at the 1936 Olympics. Lewis was one of the biggest sporting celebrities in the world by the start of 1984, but owing to track and field’s relatively low profile in America, Lewis was not nearly as well known there.

In 1988, Florence Griffith Joyner (also known as Flo-Jo), born and raised in Los Angeles, and a UCLA graduate, won three gold medals at the 1988 Olympics in Seoul. She is considered the fastest woman of all time based on the fact that the world records she set in 1988 for both the 100m and 200m still stand and have yet to be seriously challenged.

In 1991, Rodney King was beaten by police officers. His videotaped beating was controversial, and heightened racial tensions in Los Angeles. Just 13 days after the videotaped beating of King, a 15-year-old African-American girl named Latasha Harlins was shot and killed by a 51-year-old Korean store owner named Soon Ja Du. A jury found Du guilty of voluntary manslaughter, an offense that carries a maximum prison sentence of 16-years. However, trial judge, Joyce Karlin, sentenced Du five years of probation, four hundred hours of community service, and a $500 fine. When four Los Angeles Police Department officers were acquitted of charges associated with the beating of Rodney King, the decision led to the 1992 Los Angeles riots.

In 1993, Etta James was inducted into the Rock and Roll Hall of Fame. Known as the “The Matriarch of R&B”, James is regarded as having bridged the gap between rhythm and blues and rock and roll, and is the winner of six Grammys and 17 Blues Music Awards. She was inducted into the Blues Hall of Fame in 2001, and the Grammy Hall of Fame in both 1999 and 2008. James was born the Watts neighborhood of Los Angeles, and received her first professional vocal training at age five from James Earle Hines, musical director of the Echoes of Eden choir, at the St. Paul Baptist Church in South Central.

In 2002, Serena Williams, raised in Los Angeles, became the Women’s Tennis Association’s World No. 1 player. Williams is regarded by some experts and former tennis players to be the greatest female tennis player in history. She has won four Olympic gold medals and is the only female player to have won over $60 million in prize money. Williams is the reigning US Open, WTA Tour Championships and Olympic ladies singles champion.

d largely in the Watts area of Los Angeles, he recorded in a band in Los Angeles in the 1940s.

Starting in the year 2010, for the first time since the California Gold Rush, California-born residents make up the majority of the state’s population.[109] Along with the rest of the United States, California’s immigration pattern has also shifted over the course of the late 2000s-early 2010s.[110] Immigration from Latin American countries has dropped significantly with most immigrants now coming from Asia.[111] In total for 2011, there were 277,304 immigrants. 57% came from Asian countries vs. 22% from Latin American countries.[111] Net immigration from Mexico, previously the most common country of origin for new immigrants has dropped to zero/less than zero, since more Mexican nationals are departing for their home country than immigrating.[110] As a result it is estimated that Hispanic citizens will constitute 49% of the population by 2060, instead of the previously projected 2050, due primarily to domestic births

According to the United States Census Bureau in 2015 the population self-identifies as (alone or in combination):[118]

By ethnicity, in 2015 the population was 61.2% non-Hispanic (of any race) and 38.8% Hispanic or Latino (of any race).  As of 2011, 75.1% of California’s population younger than age 1 were minorities, meaning that they had at least one parent who was not non-Hispanic white (white Hispanics are counted as minorities).

The state’s population of undocumented immigrants has been shrinking in recent years, due to increased enforcement and decreased job opportunities for lower-skilled workers.[113] The number of migrants arrested attempting to cross the Mexican border in the Southwest plunged from a high of 1.1 million in 2005 to just 367,000 in 2011.[114] Despite these recent trends, illegal aliens constituted an estimated 7.3 percent of the state’s population, the third highest percentage of any state in the country,[115][note 2] totaling nearly 2.6 million.[116] In particular, illegal immigrants tended to be concentrated in Los Angeles, Monterey, San Benito, Imperial, and Napa Counties – the latter four of which have significant agricultural industries that depend on manual labor.[117] More than half of illegal immigrants originate from Mexico.[116]

English serves as California’s de jure and de facto official language. In 2010, the Modern Language Association of America estimated that 57.02% (19,429,309) of California residents age 5 and older spoke only English at home, while 42.98% spoke another primary language at home.