Host to the 9th Pan African Congress will be – 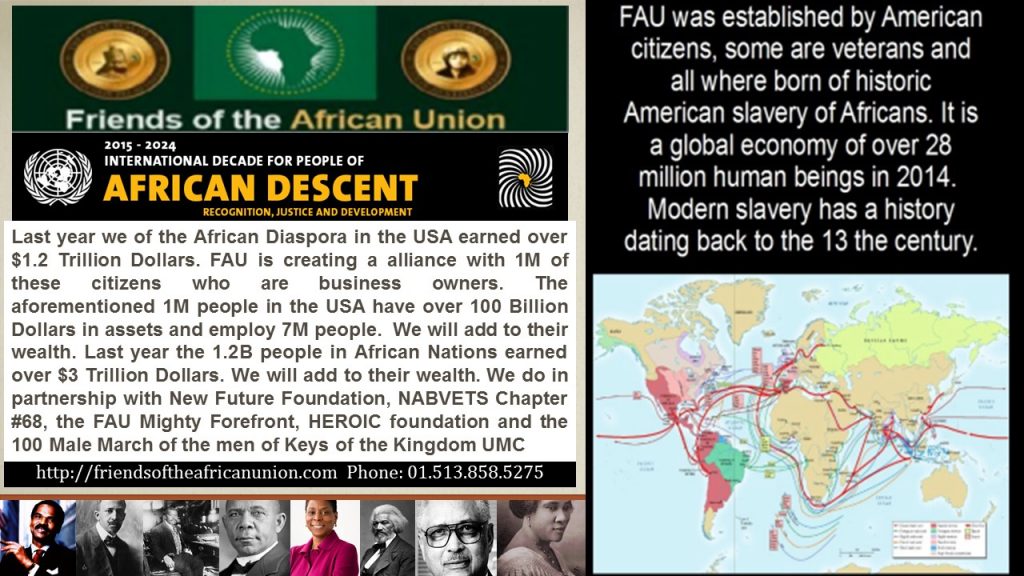 We, the representatives of the global Pan African family, who supports the African Union and the proposal framework of the FAU Response to the 2015 United Nations Universal Periodic Review of the USA, will gather in Cincinnati, Ohio, in the United States of America from December 26th through December 31th 2018 and online video conference,  telephonic conference calls and collaborative online documents to review progress made thus far since the 8th Pan African Congress in 2015 and to take stock of the continual challenges confronting African persons of African descent globally.

The formal planning session of the 9th Pan African Congress in 2018 is to be held April 25th -May 2nd, 2018 in Washington DC. , we will have weekly online conference leading up to this date.

The 9th Pan African Congress planning sessions shall have the following Committees:

We recognized that we belong to a historical tradition of congress and regional meetings that have convened over irregular periods since 1900, incorporating ardent Pan Africanists of various persuasions from the Global Pan African Family, who brought ideologies and political practice from a diverse set of circumstances in a search for a more positive future for all.

We strongly condemn all forms of religious extremism and other forms of fundamentalism and uphold building an environment for religious freedom of consciousness and expression.

We also recolonize that the African Union can be a representative governmental body of the people of Africa worldwide. Through it we support African leadership to immediately implement processes and structures that incorporate the 6th region of the African Union, the Diaspora, in implementing Agenda 2020 and Agenda 2063.

We unequivocally condemn the unchecked violence being perpetrated by extremist groups such as the Jama’atu Ahlis Sunna Lidda’Awati Wal-Jihad (Boko Haram), Al Shabaab, Islamic State of Iraq and Syria (ISIS), Al Qaida, Democratic Forces for the Liberation of Rwanda (FDLR), Allied Democratic Forces (ADF), Lord’s Resistance Army (LRA) and Janjaweed against African people and support the creation of a African Union standing force to meet these and other groups.