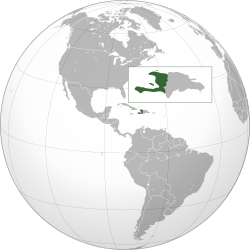 Haiti, officially the Republic of Haiti is a sovereign state in the Western Hemisphere (North America). The country is located on the island of Hispaniola, in the Greater Antilles archipelago of the Caribbean. It occupies the western three-eighths of the island, which it shares with the Dominican Republic.  Haiti is 27,750 square kilometres (10,714 sq mi) in size and has an estimated 10.6 million people, making it the most populous country in the Caribbean Community (CARICOM) and the second-most populous country in the Caribbean as a whole.

Originally inhabited by the indigenous Taíno people, Spain first discovered the island on 5 December 1492 during the first voyageof Christopher Columbus across the Atlantic. When Columbus initially landed in Haiti, he had thought he had found India orAsia. On Christmas day, Columbus’ flagship the Santa Maria, ran aground north of what is now Limonade. As a consequence, Columbus ordered his men to salvage what they could from the ship, and he created the first European settlement in the Americas, naming it La Navidad after the day the ship was destroyed.

The island was named La Española and claimed by Spain, which ruled until the early 17th century. Competing claims and settlements by the French led to the western portion of the island being ceded to France, which named it Saint-Domingue. The development of sugarcane plantations, worked by slaves brought from Africa, led to the colony being among the most lucrative in the world.

In the midst of the French Revolution (1789–1799), slaves and free people of colour revolted in the Haitian Revolution (1791–1804), culminating in the abolition of slavery and the defeat of Napoleon Bonaparte‘s army at the Battle of Vertières.

The Haitian Revolution was the only slave uprising that led to the founding of a state free from slavery and ruled by non-whites and former captives.

Afterward the sovereign nation of Haiti was established on 1 January 1804 – the first independent nation of Latin America and the Caribbean, the second republic in the Americas, the only nation in the western hemisphere to have defeated three European superpowers (Britain, France andSpain), and the only nation in the world established as a result of a successful slave revolt.[18][19] The rebellion that began in 1791 was led by a former slave and the first black general of the French Army,Toussaint Louverture, whose military genius and political acumen transformed an entire society of slaves into an independent country. Upon his death in a prison in France, he was succeeded by his lieutenant, Jean-Jacques Dessalines, who declared Haiti’ssovereignty and later became the first Emperor of Haiti, Jacques I. The Haitian Revolution lasted nearly a decade; and apart from Alexandre Pétion, the first President of the Republic, all the first leaders of government were former slaves. The Citadelle Laferrière is the largest fortress in the Americas. Henri Christophe – former slave and first king of Haiti, Henri I – built it to withstand a possible foreign attack.

In addition to CARICOM, Haiti is a member of the Latin Union, theOrganization of American States, and the Community of Latin American and Caribbean States; it is also seeking associate membership status in the African Union. It has the lowest Human Development Index in the Americas. Most recently, in February 2004, a coup d’état originating in the north of the country forced the resignation and exile of President Jean-Bertrand Aristide. A provisional government took control with security provided by theUnited Nations Stabilization Mission in Haiti (MINUSTAH). Michel Martelly, the previous president, was elected in the 2011 general election.