This is not the first time Haiti’s national election has been delayed. According to the U.N., a first-round vote for president was held on Oct. 25, 2015.  The U.S. spent $33 million to support the election, according to Kenneth Marten, the State Department’s special coordinator for Haiti.

Now Haiti is determining its future, we African Americans have to help. The Obama adminstration has now given $5M to help the cost of a $55M election that was just held. FAU Chairman Hershel Daniels Junior

With 27 presidential candidates and 179 others running for 16 Senate seats and 25 in the Lower Chamber of Deputies, the results won’t be known till thr week of November 28th.  The official American election vote count since Nov. 8th is still ongoing, over two weeks later.

This Hatian Election Day featured the new fraud-deterrent purple indelible ink and the will of the people.   We at FAU supported the people who opposed the international community, which had refused to help Haiti underwrite the elections’ $55 million pre-Matthew price tag because it opposed the rerun decision (many suspect becuase their canadates would lose a free and fair election).

The Citizen’s Observatory for the Institutionalization of Democracy, a consortium of various local organizations including human rights group, echoed similar sentiments, asking that everyone involved in the electoral process “especially political parties, candidates, their supporters and law enforcement maintain democratic behavior until the end of the process.”  The organization urged Haitians to let the country’s electoral process work: “The results of the elections must be a reflection of the verdict of the ballot boxes and not the expression of fraud (ballot boxes and others) or violent movements through the streets.”

The Organization of American States, which fielded 130 observers around the country to observe the vote, said it was also pleased with how the vote took place Sunday despite concerns about low turnout. “We’ve seen, in general terms, a peaceful day, very few minor incidents,” said Gerardo de Icaza, director of the Organization of American States’ department for Electoral Cooperation and Observation Secretariat. “We have not observed any incidents out of the ordinary. We’re more optimistic than on Oct 25.”

The country deployed nearly 13,000 Haitian National Police and United Nations police officers to keep watch over Election Day. Gary Desrosiers, with the Haiti National Police, confirmed that police arrested “several individuals on Saturday night with several national identification cards.” The cards are also used for voting. “To whom do these cards belong? What is their objective? One person can’t have that many cards on them,” Desrosiers said.

Of 9,400 Haiti police officers deployed for election day, only 1,880 had ensured they would be able to vote at a polling station other than their assigned one, Berlanger, the elections chief, said. He noted that in order to diminish the incidents of fraud and chaos that tainted last year’s elections — when more than 900,000 poll workers were allowed to vote at any station of their choosing — the council this time opted not to provide any special authorizations for people who were not on the voter list.

How much of an issue the lists will become remains to be seen. Presidential candidate Jovenel Moïse addressed it only by saying that Haiti’s institutions are weak, and as president he would give the country a permanent elections body to reduce such problems.

After casting his vote in Trou-du-Nord in the northeast, he called on people to head to the polls, noting that after 15 days of rain, the weather had finally let up.  “When you don’t vote, you can’t complain,” Moïse said. “There is not a country on this earth where you can talk about development if it’s not stable.”

Hours after Moïse voted, his opposition rival, Jude Célestin, who had made the Oct. 25 runoff with him but denounced the result, cast his ballot. Welcomed by a horde of media and supporters, Célestin had to fight his way the voting booth. Afterward, he was carried down the street on the shoulders of supporters.

“We’re halfway though the day,” Célestin said. “It’s not done yet. We want people to go out and vote. It’s time that, as Haitian people, we take our destiny in our own hands.” Disclosure – this is the canadate our FAU Hati team backed.

Célestin, whose refusal to participate in a runoff after the Oct. 25 vote led to a verification commission and, eventually, the decision to rerun the election, said he was concerned about reports of Haitians not finding their names on voter lists.

Among the improvements in Sunday’s election: the indelible ink, a stain placed on the thumb so no one could vote twice. Also, the voting booths were studier and provided more privacy. And mandataires wore ID cards with their photos on them and were only allowed to vote where they were registered.

Haiti chose to rerun last year’s presidential elections after the fraud allegations hampered runoffs, throwing the country into a political and electoral crisis. Martelly was forced to leave office without an elected successor after his five-year term ended on Feb. 7. An interim government has been in charge since then.

The international community, led by the U.S., criticized the rerun decision and announced it would not provide funding to help with the $55 million price tag. But after Hurricane Matthew made landfall in Haiti on Oct. 4 as a Category 4 storm, the U.S. softened its stance and gave the country about $5 million to help prepare damaged voting bureaus for Sunday’s elections.

“This has been a Haitian statement, a much more organized Haitian election,” the OAS’ de Icaza said of Sunday’s vote. “Let’s maintain that proud moment…for the days to come. This is an opportunity.”

The Haitian Revolution was the only slave uprising that led to the founding of a state free from slavery and ruled by non-whites and former captives. A total of 23 constitutions have been promulgated throughout Haiti’s history, the first of which was promulgated under the short-lived government of then-Governor-General Toussaint L’Ouverture, who had become the leader of the revolutionary forces in the Haitian Revolution. Constitution of Saint-Domingue (1801).

Constitution of 2012. Currently in force. Re-legalizes dual citizenship, allows for Haitians living abroad to own land and run for Haitian political office (except for offices of president, prime minister, senator or member of the lower house of Parliament). Also demands the establishment of a permanent constitutional court to resolve disputes between Parliament and the executive, a new permanent electoral council to replace the provisional CEP, and that 30 percent of government jobs be held by women.  A new election is scheduled for October 2016 for the President.

Elections in Haiti utilizes a two-round system; a second round will be held if no candidate wins a majority of the vote in the first round. On 5 April 2016, the Conseil Electoral Provisoire declared that a fresh election will be held on 9 October 2016 with a possible second round on 8 January 2017. 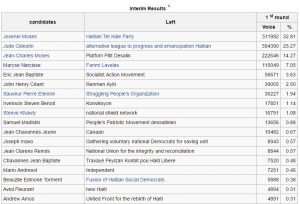 As per 11 July 2016, a total of 27 candidates have confirmed their candidacy with the Conseil Electoral Provisoire.

Candidates in bold received more than 5% of the popular votes in the 2015 election.