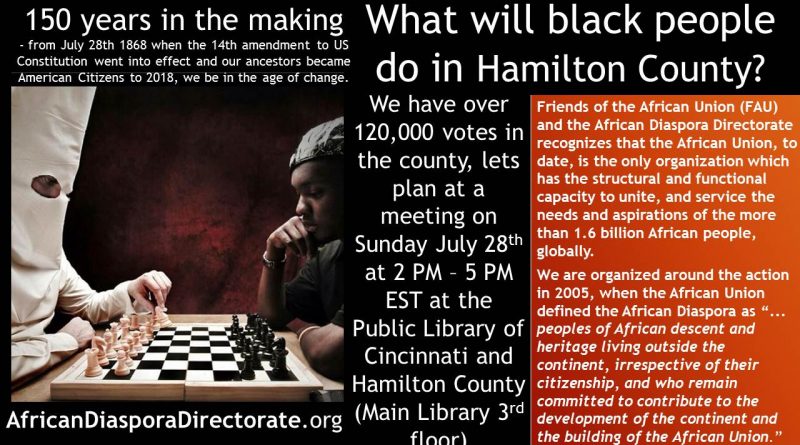 On this International Day of Democracy, we at Friends of the African Union reflect on our nation’s commitment to the rights that create the foundation of our democracy. In the United States, those rights have been defined by civil war – two one for Indiependence and the other to continue as a union of states aligned around respect for individual liberty and human dignity.

While the United States Government commends governments that have undertaken reforms to allow civil society to thrive, we at the Friends of the African Union remain deeply concerned by lack engagement by the countries 47m people of African Descent in the global civic space. By October 3rd 2019 we plan to change that through the African Diaspora Directorate.

There is a story, often told, that upon exiting the Constitutional Convention Benjamin Franklin was approached by a group of citizens asking what sort of government the delegates had created. His answer was: “A republic, if you can keep it.”

The American people of African Descent now enjoy the fruits of democracy based on a 400-year history since August 25th 1619. We will thrive because we will use our fundamental freedoms to create opportunities for economic, cultural, educational, and societal progress of not only ourselves but our fellow Americans through our proposed solutions to issues of global human rights problems identified in the Universal Periodic Review of the USA in 2015. We agree that Nations are more secure, peaceful, and prosperous when civil society engages freely and participates in democratic processes without intimidation. In the United States, we will through the African Diaspora Directorate, strive to be a leader in protecting civic space to bolster the foundations of democracy.

FAU believed that Obama Administration executive action of a $5T USD Quantitative Easing debt purchasing program called the #BlackFolksPlan that used The Daniels IDIQ (under license) would be a solution for the fundamental injustice, cruelty, brutality, and inhumanity of 76 years African slavery in the USA and its effects subsequently de jure and de facto of racial and economic discrimination on the descendant Americans of African heritage.

Now we are creating an updated superset of the #BlackFolksPlan of 2017 © by Hershel Daniels Junior will be licensed for a to be neigotiated percentage of assets under management.

Friends of the African Union with implimentation allies such as the African Diapsora Directorate believes that this is the time that by executive action by the President of the United States of America a FAU driven public-private partnership that can be created with allied individuals, investors, companies and nations using the African Dollar, a new cyber currency created by Hershel Daniels Junior as part of a fork of USPTO 5,577,942 that can be implemented as an asset-based solution for the fundamental injustice, cruelty, & inhumanity of past slavery in the USA that will be a stimulus to the American Economy that:

(1) is judicious and provides a solution for over 7 million American citizen households that have lead contamination based on previous congressional action that passed the Residential Lead-Based Paint Hazard Reduction Act of 1992, also known as Title X, so as to protect affected families, with American citizen workers, from exposure to lead from paint, dust, and soil using African American contractors, individually and or in rules established in Small Business Administration based joint ventures whereas they are in the majority;

(2) answers statements set forth in the interagency response set forth in 2014 by the US State Department to the United Nations Universal Periodic Review of the United States of America in 2015 that said Civil Rights, Ethnic, and Racial Discrimination is the number one human rights problem in the United States of America and under the Trump  Administration we propose a public-private partnership with the FAU USA Bureau and our New York Public Benefit Company with allies and partners that will set a course of action to provide a solution to this historic problem for over 37 million Americans based our shared history as a nation. This history is from between 1789 and 1865 as a slave nation and as our progenitors the 13 American colonies between 1619 and 1789 also supported slavery and the effects subsequently de jure and de facto of racial and economic discrimination on the descendant Americans of America’s African slavery and address the damage incurred by past and current federal government racism against freed African Slaves in the United States from 1865 to 1867 and African Americans from 1868 to 2019;

(3) draws on already established authority using market infrastructure including the model created around the $30B Fiftyh Third Bank Community Benenfit Agreement to reduce the United States poverty rate which remains a social issue for our Nation and a national security threat especially for African American communities who continue to experience higher than average poverty rates and through this unique unsolicited proposal will support those seeking to become homeowners through employment  based on the knowledge that joblessness and economic insecurity contribute to the incidence of mental illness, family violence, suicide, substance abuse, crime, and diminished capacity for health, family, and community functioning & that through a program of sports and recreation we can address these problems;

(4) helps the other Americans through indirect associations by creation of supportive ancillary jobs and entrepreneurial opportunities thereby supporting the advancement of the American people as a whole, and;

(5) is just adequate enough to implement real changes that reverse long-standing conditions caused by systemic de jure and de facto racial and economic discrimination, as documented in depth elsewhere and provides a means from 2019 to 2169 to address these issues with a 150-year public-private partnership with a sinking fund trust to do so.