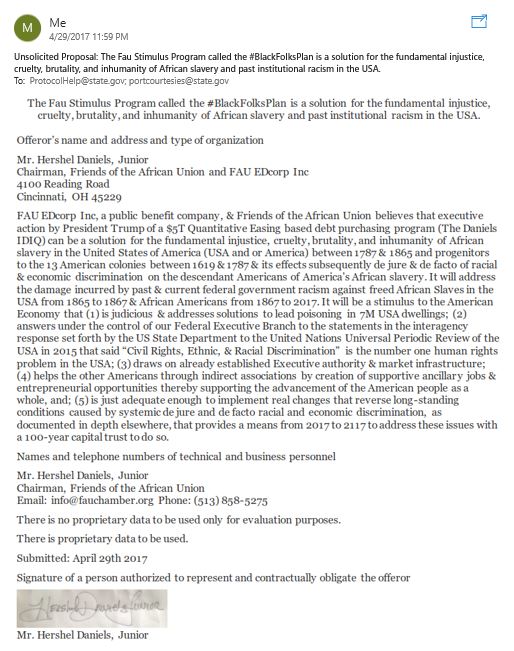 We propose under the control of a board of Trustees appointed by Friends of the African Union Chamber of Commerce who is a member of the National Community Reinvestment Coalition and additional members appointed by President Trump through The White House Office of American Innovation to create a historic solution to the effects of past American slavery through the proposed private-public partnership (P3) as an unsolicited proposal to the US Government that will be an unprecedented stimulus to the American Economy. It will be an empowerment of 40M American citizens through our P3 named the FAU Community Reinvestment Coalition to Make America Great (FAU CRC MAG) with a goal of $5T lifetime (2017-2117) capitalization that is invested on the following basis, subject to modification through May 25th 2017, USE OF PROCEEDS FROM THIS ASSET PURCHASE PROGRAM

I did send one to the President at 12:01 but our authority comes through the Universal Periodic Review, the Human Rights Council which will review, on a periodic basis, the fulfilment by each of the 193 United Nations Member States of their human rights obligations and commitments.

The review itself takes place in Geneva in a session of the Working Group on the UPR, which is composed of the 47 member States of the Human Rights Council. The review takes the form of an interactive dialogue between the State under review and the member and observer States of the Council. At the end of each review, the Working Group adopts an outcome document, which is subsequently considered and adopted by the Human Rights Council at a later session.

(a) Contributions to UPR documentation by “Other Stakeholders”, including civil society and national human rights institutions

The UPR process provides for the participation of all relevant stakeholders, including non-governmental organizations (NGOs) and national human rights institutions (NHRIs). Civil society actors and NHRIs can submit information which can be added to the “other stakeholders” report which is considered during the review. Information they provide can be referred to by any of the States taking part in the interactive discussion during the review at the Working Group meeting. NGOs can attend the UPR Working Group sessions and can make statements at the regular session of the Human Rights Council when the outcome of the State reviews are considered.

Stakeholders should follow the technical guidelines for stakeholders submissions issued by OHCHR, to send written contributions to UPR documentation.

Additional Technical guidelines for the submission of information by national human rights institutions (PDF) have also been issued by OHCHR.

Our original proposal accepted by the UN in 2014:


The ten areas to be commented on in that proposal was based on subject headings detailed by the US State Dept. in response to the UPR (those in BOLD we expanded in our submission and or followup)