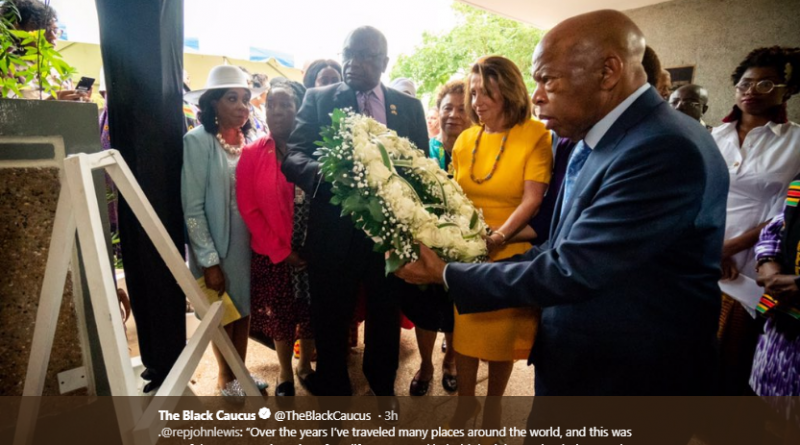 Kwame Nkrumah PC (21 September 1909[a] – 27 April 1972) was a Ghanaian politician and revolutionary. He was the first Prime Minister and President of Ghana, having led the Gold Coast to independence from Britain in 1957. An influential advocate of pan-Africanism, Nkrumah was a founding member of the Organisation of African Unity and winner of the Lenin Peace Prize in 1962.

After twelve years abroad pursuing higher education, including ten years in the USA, developing his political philosophy and organizing with other African diasporic pan-Africanists. According to historian John Henrik Clarke in his article on Nkrumah’s American sojourn, “the influence of the ten years that he spent in the United States would have a lingering effect on the rest of his life.”

President Nkrumah spent his summers in Harlem, a center of black life, thought and culture. He found housing and employment in New York City with difficulty and involved himself in the community. He spent many evenings listening to and arguing with street orators, and according to John Henrik CLarke, In Clarke, (October 1974). “Kwame Nkrumah: His years in America”. The Black Scholar. 6 (2): 9–16. JSTOR 41065759 stated, “These evenings were a vital part of Kwame Nkrumah’s American education. He was going to a university – the university of the Harlem Streets. This was no ordinary time and these street speakers were no ordinary men …The streets of Harlem were open forums, presided over [by] master speakers like Arthur Reed and his protege Ira Kemp. The young Carlos Cook, founder of the Garvey oriented African Pioneer Movement was on the scene, also bringing a nightly message to his street followers. Occasionally Suji Abdul Hamid, a champion of Harlem labour, held a night rally and demanded more jobs for blacks in their own community …This is part of the drama on the Harlem streets as the student Kwame Nkrumah walked and watched.”

Nkrumah returned to the Gold Coast to begin his political career as an advocate of national independence. He formed the Convention People’s Party, which achieved rapid success through its unprecedented appeal to the common voter. He became Prime Minister in 1952 and retained this position when Ghana declared independence from Britain in 1957. It was a ceremony attended by the Rev. Dr. Martain Luther King. In 1960, Ghanaians approved a new constitution and elected Nkrumah President.

The first time a delegation from the US House lays flowers of remembrance in Ghana to late First President of Ghana, Kwame Nkrumah.

Kwame Nkrumah later suspected that the US had a role in his downfall and former CIA intelligence officer John Stockwell backed this theory up. In his book In Search of Enemies he writes that an official sanction for the coup does not appear in CIA documents, but he writes “the Accra station was nevertheless encouraged by headquarters to maintain contact with dissidents. Having managed American involvement in the Angolan Civil War as Chief of the Angola Task Force during its 1975 covert operations, he resigned and wrote In Search of Enemies. The CIA retaliated by suing him in the 4th District Court in Washington, D.C.. Part of the suit intended to eliminate the possibility of selling the story for the purpose of making the movie and requested all future publications be submitted to the CIA for review. Unable to afford the travel necessary to contest the case, Stockwell filed for bankruptcy in Austin, Texas. After the litigation was processed through the bankruptcy, the CIA eventually dropped the suit.

Ref.: John Stockwell, former Chief of the Angola Task Force of the U.S. Central Intelligence Agency (CIA), wrote in his book (1978). In Search of Enemies: A CIA Story. New York: W.W. Norton & Company. p. 201n. ISBN0-393-00926-2 that agents at the CIA’s Accra station “maintained intimate contact with the plotters as a coup was hatched”. Afterward, “inside CIA headquarters the Accra station was given full, if unofficial credit for the eventual coup. …None of this was adequately reflected in the agency’s written records

“It was given a generous budget, and maintained intimate contact with the plotters as a coup was hatched.” He says that the CIA in Ghana got more involved and its operatives were given “unofficial credit for the eventual coup”.

A declassified US government document does show awareness of a plot to overthrow the president, but does not indicate any official backing.

Another declassified document written after the coup describes Nkrumah’s fall as a “fortuitous windfall. Nkrumah was doing more to undermine our interests than any other black African”.

Following the coup, Ghana realigned itself internationally, cutting its close ties to Guinea and the Eastern Bloc, accepting a new friendship with the Western Bloc, and inviting the International Monetary Fund and World Bank to take a lead role in managing the economy. With this reversal, accentuated by the expulsion of immigrants and a new willingness to negotiate with apartheidSouth Africa.