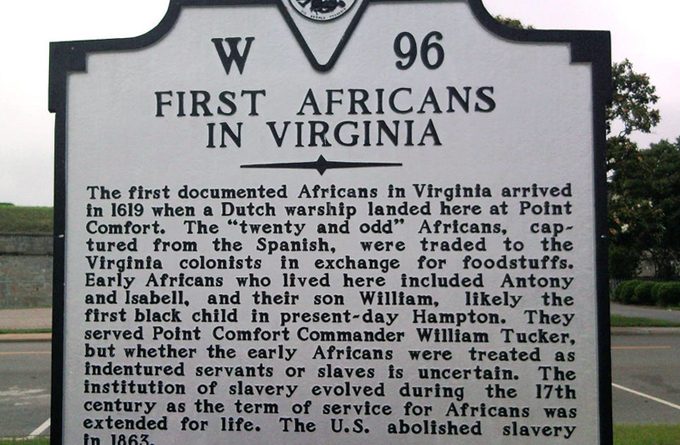 WHEREAS our Actions this year as a cofounder of the African Diaspora Directorate who on August 25th at the 1619 Commemoration of the African Diaspora Directorate in Cincinnati Ohio at the Main Public Library Public Library, the Georgetown Public Library in Washington DC and at Leimert Park during the monthly Sankofa Village was based on The 400 Years of African-American History Commission Act. A law signed into law January 8, 2018, by President Trump, which established a 15-member commission to coordinate the 400th anniversary of the arrival of the first enslaved Africans in the English colonies. This commemoration was based on the US federal government recognizing by law on August 25th, 1619, 20 Africans were brought to Point Comfort in the English colony of Virginia—this site is now part of Fort Monroe National Monument.  We do not know if they were enslaved or indentured

Background: Indentured servants first arrived in America in the decade following the settlement of Jamestown by the Virginia Company in 1607.  The idea of indentured servitude was born of a need for cheap labor and European practices relative to poverty. The earliest settler’s leadership soon realized that they had lots of land to care for, but not enough people one to care for it. With passage to the Colonies expensive for all but the wealthy, the Virginia Company developed the system of indentured servitude to attract workers. Indentured servants became vital to the colonial economy.

The timing of the Virginia colony was ideal. The Thirty Year’s War had left Europe’s economy depressed, and many skilled and unskilled laborers were without work. A new life in the New World offered  these Europeans a glimmer of hope; this explains how one-half to two-thirds of the immigrants who came to the American colonies arrived as indentured servants.

These Indentured Servants typically worked four to seven years in exchange for passage, room, board, lodging and freedom dues. While the life of an indentured servant was harsh and restrictive, it wasn’t slavery. There were laws that protected some of their rights. But their life was not an easy one, and the punishments meted out to people who wronged were harsher than those for non-servants. An indentured servant’s contract could be extended as punishment for breaking a law, such as running away, or in the case of female servants, becoming pregnant.  For those that survived the work and received their freedom package which may have included at least 25 acres of land, a year’s worth of corn, arms, a cow and new clothes.

Hence why the cry has been for reparations.  Here is what we say to the reparations ask.

NOW HAVING celebrated the 1619 Commemoration of the African Diaspora Directorate and as part of the and continued legacy into the newly formed United States of America in which the first casualty in its war of Independence from its British Colonial Masters was Crispus Attucks (c.1723 – March 5, 1770), a longshoreman of African and Native American descent, who is widely regarded as the first person killed in the Boston Massacre and thus the first man killed in the American Revolution we give public notice of purpose to adopt as a plan of action these goals:

Now the 1619 Commemoration of the African Diaspora Directorate purpose this day is to adopt as a plan of action these goals:
(1) assist states, localities, nonprofit organizations and investors in American History to further the commemoration of 400 years of Africans via the 400 Years of African-American History Commission and coordinate public scholarly research about the arrival of Africans and their contributions to the United States and institutionalize in libraries and online the local history of People of African Descent in the United States of America between March 4th 1789 and June 19th 1865 and its progenitors the 13 American colonies between 1619 and 1789 and the effects subsequently de jure and de facto of racial and economic discrimination on the descendant Americans of America’s African slavery and address the damage incurred by past and current federal government racism against freed African Slaves in the United States from 1865 to 1868 and African Americans from 1868 to 2019;

(2) recognize, highlight and create, online, lessons in the resilience and cultural contributions of Africans and African Americans over 400 years through the creation of the history of Africans in North America that would go past 1619 but be held to metrics of historical study and recorded history;

(3) plan, develop, and carry out programs and activities throughout the United States over the next year that culminates in the creation with members of the United Methodist Church (UMC) and allies of the African Diaspora Directorate of annual Black Family Reunions around the 25th of August each year;

(4) plan, develop, and carry out programs and activities that work National Historic Sites based on an unsolicited proposal to the Secretary of the Interior in accordance with the provisions of the Act entitled “An Act to establish a National Park Service, and for other purposes”, approved August 25, 1916, as amended (16 I’.S.C. 1 et seq.), and the Act entitled ”An Act to 39 stat. 535. which is meant to provide for the preservation of historic American sites, buildings, objects, and antiquities of national significance, and for other purposes”, approved August 21, 1935 (16 U.S.C. 461 et seq.). ^^ stat. 666. starting with the William Howard Taft National Site which shall celebrate its 50th year of existence on its approval date of December 2, 1969;

(5) create and or participate in chapters of the United Nations Association of the USA so as to acknowledge the impact that slavery and laws that enforced racial discrimination had on the United States and develop solutions based on work in the United Nations such as the Working Group of Experts on People of African Descent (#WGEPAD) visit to the United States of America, 19-29 January 2016 (A/HRC/33/61/Add.2 ) and the Universal Periodic Review of Nations;

(6) launch, encourage civic, patriotic, historical, educational, artistic, religious, political and economic organizations to organize and take part in the creation of a unified plan of action, called the #BlackFolksPlan, focused on the needs of the 47M American Citizens who have African heritage and through a series of local, regional and state meetings will wrap up this work with a report created for the country every year during the Kwanzaa celebration week and given to commentary through the succeeding year’s MLK Day of Service with a vote, online and in-person, by the African Diaspora in the USA over the age of 16 facilitated by the African Diaspora Directorate, as to its adaptation;

(7) encourage civic, patriotic, historical, educational, artistic, religious, and economic organizations to organize and take part in the creation of a Public-Private Partnership(s) that by the creation of a Community Benefit Agreement(s) based debt purchasing program as a solution for the fundamental injustice, cruelty, brutality, and inhumanity of African slavery in the United States of America between March 4th 1789 and June 19th 1865 and its progenitors the 13 American colonies between 1619 and 1789 and its effects subsequently de jure and de facto of racial and economic discrimination on the descendant Americans of America’s African slavery and address the damage incurred by past and current federal government racism against freed African Slaves in the United States from 1865 to 1868 and African Americans from 1868 to 2019 that will be a stimulus to the American Economy.